“Ready for a wet landing?”

“What’s a wet landing?” I found myself asking, even though I was pretty sure I already knew the answer. 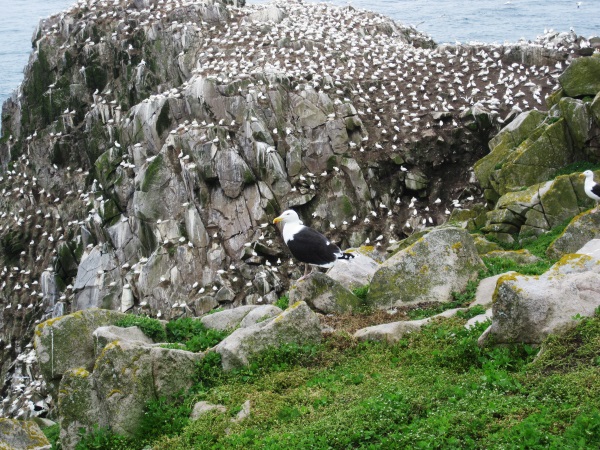 Besides Steph and I, there were four others waiting at the pier. These four, a group of jovial middle-aged men, had been trading jokes with each other since we had joined them several minutes earlier. Despite their jocularity, they all had serious looking binoculars and cameras for bird watching, and they were all wearing wellies (rubber boots). We were in hiking shoes. I mentally prepared for a day without dry feet.

“There’s no dock out there. You’ll have to jump from the dinghy to the shore.” was the reply.

With little hope, I heard myself ask, “Will our feet get wet?”

“Depends on your timing.” was the response. They all laughed. I joined in, nervously.

Slowly, several more people showed up, most of them in sneakers. Others would share in our misery of walking around in drenched shoes and socks. I found this strangely comforting.

Eventually, the captain of the ferry arrived. We boarded and were soon leaving the harbor of Kilmore Quay, Co. Wexford, heading towards Great Saltee Island.

Several years ago, on one of our previous trips, we had visited Skellig Michael off the southwestern coast of Ireland. This island, basically a giant rock isolated from the mainland by eight miles of ocean, was once inhabited by monks. Today, puffins, other seabirds, and a few small mammals are its only residents. Skellig Michael deserves its own post, but I mention it now because that was where we first fell in love with these little guys. 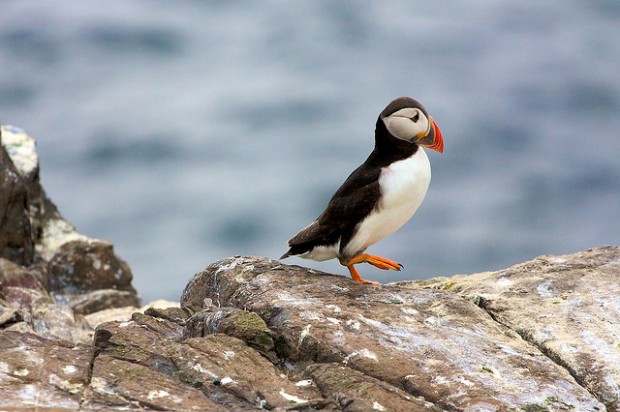 When we first started planning our trip to the south east, we stumbled upon descriptions of the Saltees online and in our guidebooks.  We immediately knew it was something we wanted to do. Great Saltee and Little Saltee combined contain Ireland’s largest population of seabirds including puffins, gulls, cormorants, gannets, razorbills, guillemots, and Manx shearwaters.

Not only did we want to see puffins, but we both enjoy the raw beauty of Ireland’s more isolated locations. That’s how we found ourselves on that ferry leaving Kilmore Quay, heading towards a small island barely a mile wide just off Ireland’s south eastern coast.

As the ferry sped across the waves, we breathed in the fresh salt sea air. The loud engine soon turned into white noise, and we were lulled by the steady rocking and rolling of the ship. Spray from the sea occasionally splashed up over the sides. Once or twice we strategically relocated to avoid the streams of water that were draining out the scuppers on the sides and the stern of the ferry.

After 20 minutes, the ferry began to slow. The captain cut the engine as we neared a dinghy anchored off the shore of Great Saltee. With a long pole, he pulled the dinghy alongside the ferry, and we carefully boarded one by one. The captain steered us to shore. Here was the moment I had been dreading. The wet landing.

The captain navigated the dinghy as far up on shore as he could. Then, just like our boarding, we exited one by one. The waves were coming in every few seconds, filling in our landing zone with water. I was the first out. I stood on the dinghy’s rubber side and waited for the water to recede. Then before the next wave advanced, I jumped onto the rocks and onto dry ground, well out of reach of the water. After all that worry, it was actually quite easy. 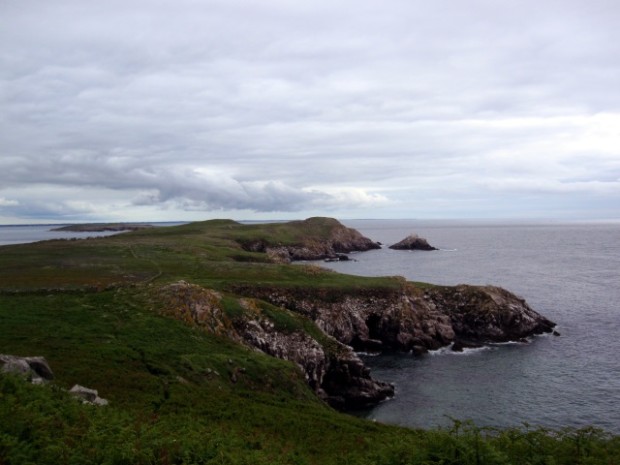 On shore and pleasantly surprised by our dry feet, we followed the trail across the island. We were thankful for the overcast day since there was no cover. It is bereft of trees and the only building is the private residence of the owners of the island. We were struck at once by the large swathes of wildflowers brightly coloring in the otherwise monochrome green of the island. I could identify the bluebells, but not the numerous white and pink flowers that bloomed beside them. As we walked along, rabbits would occasionally sprint across the trail. Startled songbirds would, with a sudden fluttering, abandon their hiding spots as we approached. 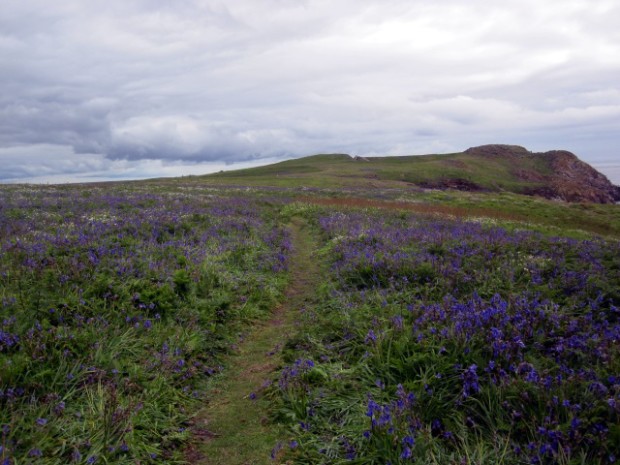 The quiet path to the western summit.

We had landed on the northern side. The trail led us across the narrow width of the island to the southern. The first of many colonies we saw was on a huge rock jutting out of the sea, home to hundreds of gannets. These large birds aren’t as charming as puffins, but they are very elegant while in flight.

As we continued along the southern coast, looking down along the cliffs, we became acquainted with several other species of birds (thanks to my binoculars and a handy pocket bird guide) including razorbills, guillemots, and shags. We passed a pair of the wellie-wearers as we continued westward. Pointing back the way we had come, I told them that there were some razorbills and guillemots as if I were a life-long birder and hadn’t just learned their names. 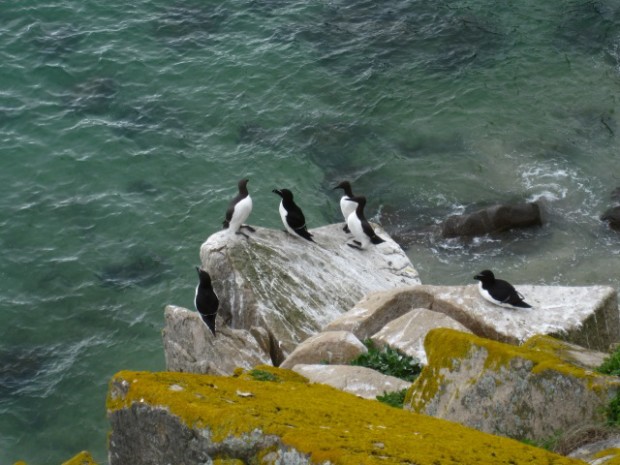 Just as we started getting a little worried that we wouldn’t see any puffins, we neared a cliff side covered in sea pinks. This was the same habitat where we spotted puffins on Skelling Michael. Sure enough, outside of their burrow, we saw our first pair. 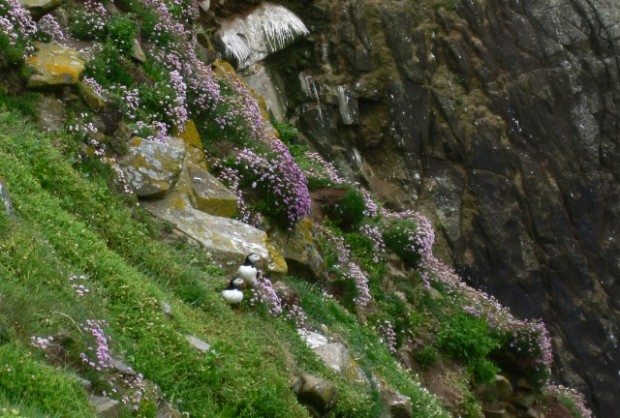 After admiring the puffins, as well as some seals in the swirling waters below, we continued along the path and reached the summit of the island. We could see for miles in every direction. To the east was the half of the island that we had just traversed. Beyond that was Little Saltee and the Irish Sea. To the north, across a narrow strip of sea, was the charming town of Kilmore Quay whose harbor we had left that morning. Gigantic windmills, with their blades slowly turning, dotted the coast. 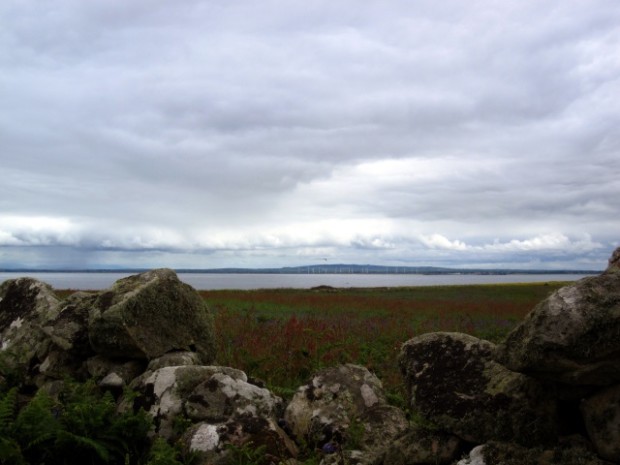 My gaze followed the mainland westward towards County Waterford. Just barely visible was Hook Head Lighthouse. I peered through my binoculars to verify and, sure enough, I could make out its distinctive white and black stripes. We had visited there the day before. Built in the 13th century, it’s the oldest operational lighthouse in the world. To the south, the Celtic Sea shone brilliantly in patches where the sun had finally broken through. A sailboat with its sails fully unfurled in the wind was tacking through the calm water. A few cargo ships could be seen off in the distance. The unexplored remainder of Great Saltee lay to the west.

After taking in these views, we descended down to the western side of the island. Along the way were many great black-backed gulls as well as other smaller species of gulls. Our last big discovery was a narrow outcrop of rock sticking out into the ocean. From top to bottom it was covered by a city of gannets. We listened to the deep bass of the waves and the high-pitched cry of the gulls. We watched the wheeling, gliding and diving seabirds. It was all quite pleasant except for the smell.

Want to watch a quick video of the Great Saltee birds in action?

We retraced our steps back up to the summit and down the other side. Once we reached the southern cliffs again, we joined a small group of puffin watchers. One puffin had a piece of grass in its mouth, which I’m guessing was for its nest. Another pair were hanging out just outside their burrow in the cliff side. In all, the number of puffins we saw on the island was in the single digits. A far cry from the hundreds we had seen on Skellig Michael, we were grateful for every glimpse. 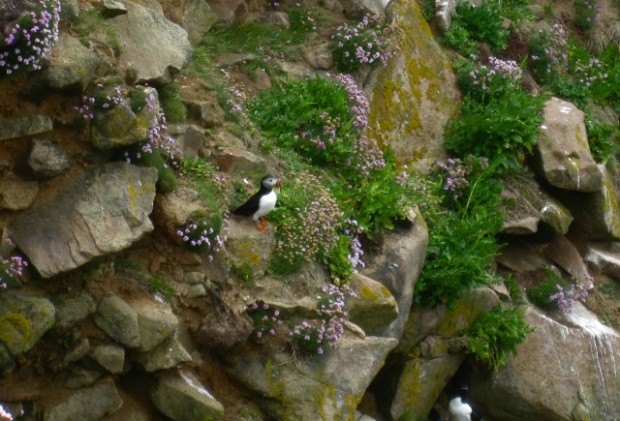 Recent observations have shown that puffins are struggling to adapt to current changes in weather patterns. The herring that make up the majority of their diet are becoming more difficult for them to find. Instead, they’re catching fish which are too large for puffin chicks to eat. North Atlantic puffin populations are declining as a result. Whether this is simply a smaller colony or if we were witnessing the decline in population firsthand, I don’t know.

We met back at the shore where we had been dropped off a few hours earlier. The tide was out now. This made boarding even trickier than the landing. The rocks, now exposed by the receding tide, were slick with water and seaweed. I carefully stepped onto each, making sure I could balance. I almost slipped a few times. Others crawled from rock to rock. Once I was close enough, someone on board the dinghy reached out their hand to help. As I climbed aboard, I looked at my feet. I smiled. They were still dry.

Stephanie’s Travel Notes: If you want to go off the beaten path, Great Saltee is a fantastic day trip. While there isn’t a lot of information online, the owners of the island created a nice website about the island’s history, birds, and nearby shipwrecks.

The boat trip is organized separately by Declan Bates, a local seaman who also runs fishing trips. He doesn’t have a website, so have your B&B owner contact Declan the day before you plan to go. It’s a small community and everybody seems to know Declan, but if want you can call him directly at +353 53 9129684 or +353 87 529736. Sailings are dependent on a good weather and interest from a enough people that day. The cost was 25 euros per person round trip.

Joe and I spent two nights in Kilmore Quay and kept an eye on the weather. We also planned other things to do in the area just in case a trip to Great Saltee wasn’t in the cards.

Check out the Trip Advisor reviews with good advice on The Saltee Islands. I would have loved wellies for the boat and walking the island, but I am not sure they’re worth the valuable luggage space. Wet feet didn’t end up being a problem for us, but it easily could have been. I suggest bringing an extra pair of socks, and hope for the best. Also, when you board the boat, sit in the middle close to the captain–you’ll avoid most of the splashing water.

We were on the island for about three hours, but our return time was up to all the members of the boat. Declan was flexible and would have picked us up earlier or later if we wanted. There are no facilities and no cover on the island. Skip the tea at breakfast, but do bring a snack as it is a nice place for an little picnic. :-)

Finally, be aware that you are on someone’s private land and they are welcoming you to visit. I hope that visitors remain respectful so that others too can enjoy the beauty of the birds and island. 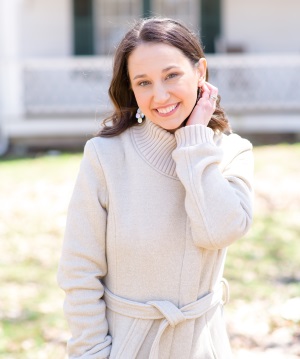